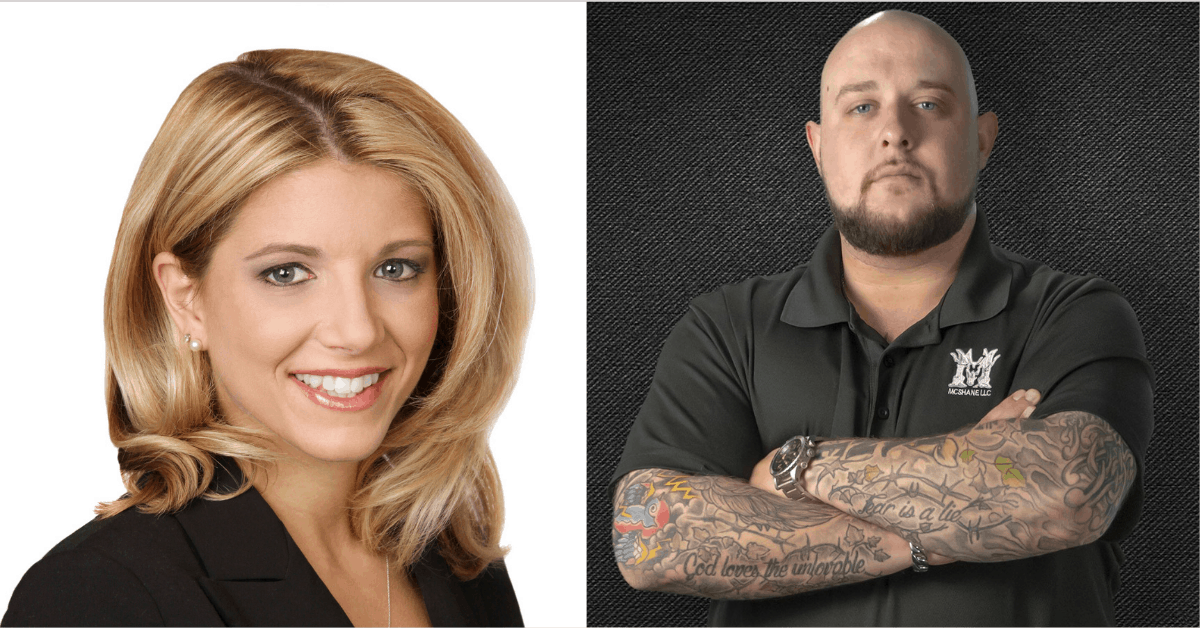 Jessica Haire enlisted the help of a political consulting firm with ties to the far-right extremist group, the Proud Boys, to survey Anne Arundel County voters on their choice for the 2022 county executive contest.

According to a “confidential” memo produced by McShane’s firm and later distributed to Anne Arundel County Republicans before Jessica Haire’s June campaign launch, the District 7 councilwoman would defeat Pittman by 2.2 percentage points if the election were held at the time voters were polled.

“Haire is on a clear path to victory should she decide to run for County Executive,” the memo concludes.

Mrs. Haire and Mr. McShane did not respond to repeated requests for comment on the nature of their professional relationship, nor would Haire confirm whether her campaign hired McShane’s firm, McShane LLC.

A copy of Jessica Haire’s polling memo (below) was forwarded to A Miner Detail in May. 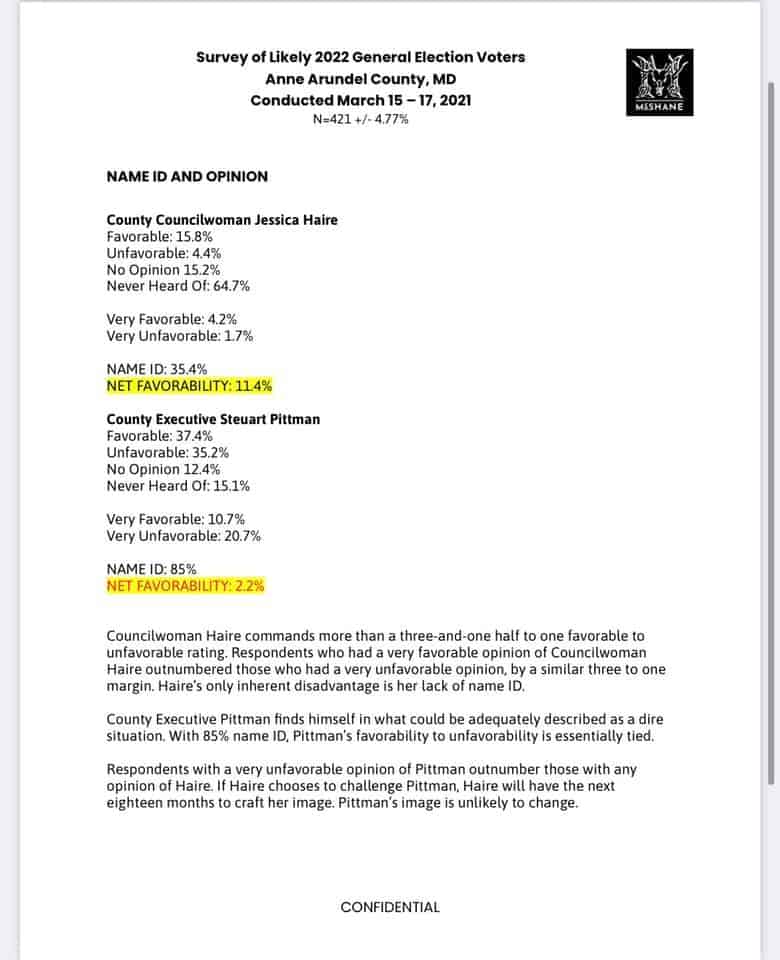 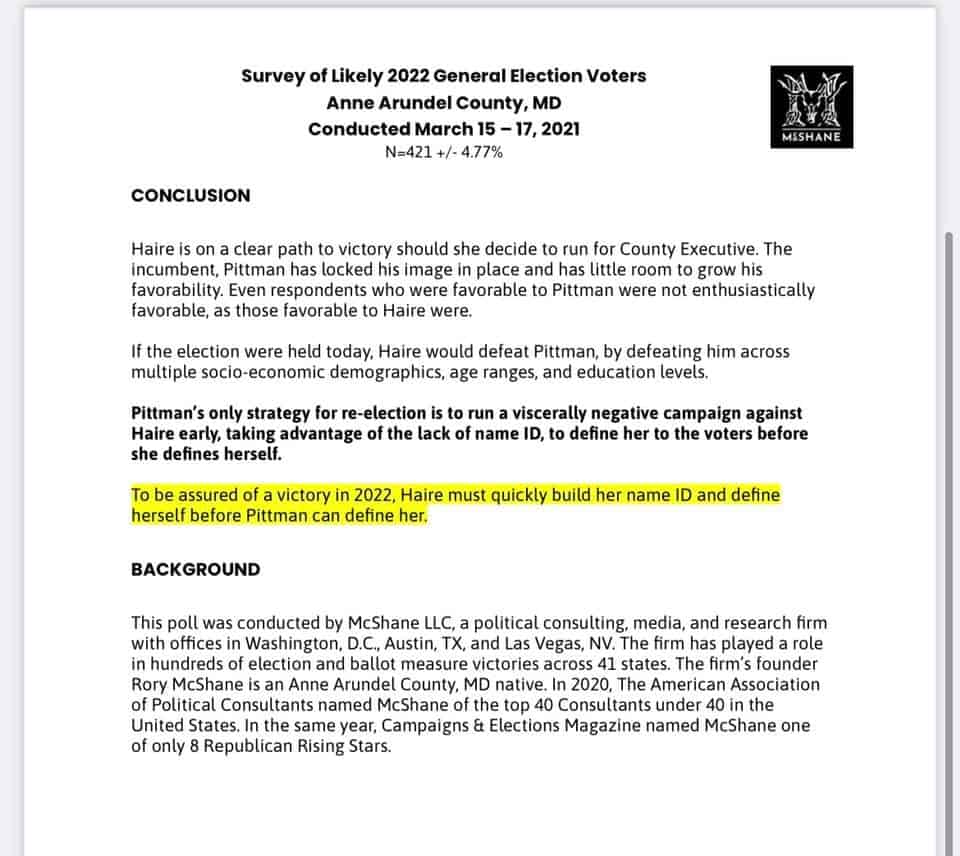 Mr. Haire, apparently operating under the guise of his chairman role of the state GOP, commissioned McShane LLC to poll Anne Arundel County voters on five additional Republicans, aside from his wife, in a hypothetical general election matchup with Pittman.

In June, a Maryland GOP insider spoke to A Miner Detail about the county executive poll Mr. Haire hired McShane LLC to conduct.

“Dirk shared it to people as an MD GOP poll, which likely has to be on one of their financials,” the state GOP insider said.

“The State Party spending money on this…what I had not seen was the individual analysis they did for Jessica Haire, but no one else. No other candidates knew this was being done – except for her [Jessica Haire].”

On March 18, McShane forwarded Mr. Haire a copy of his firm’s polling on the upcoming 2022 Anne Arundel County executive contest.

A copy of the email between McShane and Haire is seen below.

A state GOP operative with ties to the Maryland House Republican Caucus in a text message exchange with A Miner Detail claimed that Del. Nic Kipke (R-Anne Arundel) “was trying to get the House GOP caucus members to hire Rory McShane’s political consulting firm.”

Kipke and his wife are close friends with Dirk and Jessica Haire. Mr. Kipke chaired Jessica Haire’s county executive exploratory committee and is actively involved with her campaign.

The source went on to say, “He [McShane] overcharges, and evidently is also borderline criminal. He’s a grifter. So he will not be doing any work for the Caucus or our candidates.”

“Obviously, the entire purpose of the Maryland Republican Party right now is for Dirk to prop up his wife’s county executive run.”

His consulting company was tasked to access the validity of the 2020 election ballots in the Las Vegas area, according to The Washington Post‘s reporting.

According to extensive reporting by Nevada Current and The Post, McShane LLC Vice President Woodrow Johnston contacted a Nevada liberal transgender activist, who for months faked an online political persona to get close to Republican extremists and far-right activists, to “get the Proud Boys to a post-election rally protesting the validity of balloting in the presidential election.”

The Proud Boys is a far-right, neo-fascist, exclusively all-male extremist group that former President Donald J. Trump (R) told to “stand back and stand by” during the first presidential debate last September.

The group promotes and engages in political violence and describes itself as “western chauvinists.”

More than three dozen Proud Boys and Oath Keepers, another far-right group, have been charged with conspiracy-related crimes connected to the Jan. 6 insurrection at the U.S. Capitol.

Nevada Current received an email from a former Republican operative confirming the Facebook Messenger chat between Johnston and Sarah Ashton-Cirillo, the leftwing Democratic Socialist activist who spent months masquerading as an ardent Donald Trump supporter and is now running for public office in Las Vegas.

Johnston wrote to Ashton-Cirillo on election night in 2020, telling her that Rep. Paul A. Gosar (R-Ariz.), one of McShane LLC’s clients, whom McShane often speaks fondly of through his social media channels, “was preparing a ‘Brooks Brothers Riot‘ in Arizona,” The Post‘s reported.

“We might need to do the same here in Nevada,” Johnston wrote.

“Which means we need to get the Proud Boys out,” he said.

“I’ll let you know as soon as I know it’s happening. But wanted you to be mentally ready.”

“I had no knowledge of the texts. He wasn’t working on behalf of any client. Our management team has met with him, and he understands what he did wrong,” McShane said.

“The day after the election, Johnston asked Ashton-Cirillo to invite Proud Boys members and other far-right activists to a protest similar to the ‘Brooks Brothers Riot,’ according to The Post‘s reporting.

In response to inquires from The Post and other media outlets, Johnston denied operating on behalf of or in coordination with McShane LLC to recruit the Proud Boys to protest Nevada’s presidential election results at the Clark County Education Department in North Las Vegas.

There is no evidence of massive voter fraud affecting the 2020 election results, an abjectly false claim the former president and his supporters, McShane included, continue to promulgate publicly.

In February, Jessica Haire voted with Anne Arundel County Council Democrats to favor a resolution condemning the Jan. 6 insurrection at the U.S. Capitol.

One of Haire’s chief Republican rivals, Herb McMillan, is polling county voters through his campaign website about Haire’s vote to condemn Donald Trump for his involvement in the Jan. 6 melee.

“Did you know that Jessica Haire, who is running for County Executive, voted to condemn Donald Trump and bar him from ever running again?” McMillan’s poll says.

“It’s true. In early February, Jessica Haire voted with Democrats on the County Council to pass Resolution 5-21, the bill condemning Donald Trump and urging Congress to bar him from ever serving public office again.”

“Knowing Jessica Haire cast this critical vote, do you think she would be a voice for Republican voters?” McMillan’s poll asks.

A Miner Detail Podcast is set to interview Sarah Ashton-Cirillo on Wednesday, July 28 at 9:00 p.m. EST on her time spent collaborating with McShane LLC.

Ashton-Cirillo is the “transgender poker player and progressive activist who went undercover and cozied up to right-wing extremists,” The Daily Beast also reported.

The interview is set to be aired live on A Miner Detail’s Facebook page on Wednesday at 9 PM.