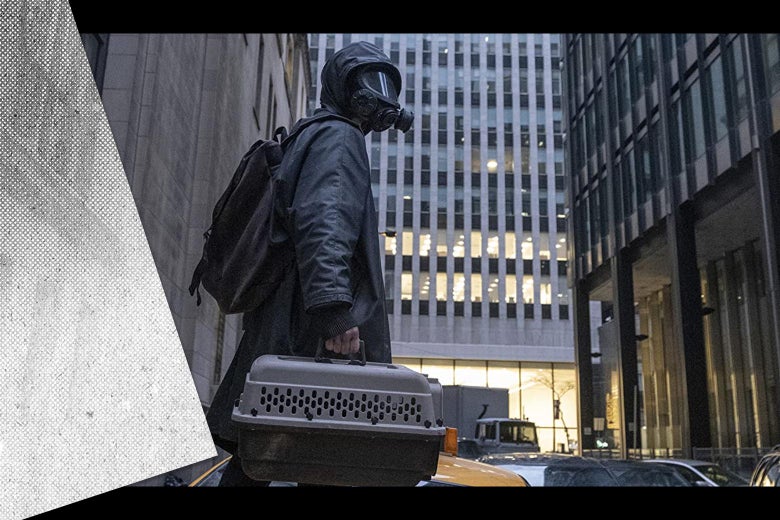 After years in development hell, FX has finally managed to adapt Brian K. Vaughan and Pia Guerra’s comic book series Y: The Last Man for the small screen. The premise is pretty simple: A plague kills every living thing on Earth with a Y chromosome in a matter of days, except for one extremely lucky man and his helper monkey. The comic book ran for 60 issues between 2002 and 2008, and it’s a real time capsule today, full of ass-kicking strong female characters in the Joss Whedon mold and vintage aughts Vertigo Comics raunch. The source material is also very much a comic book rather than a graphic novel, a fast-moving serial story that is constantly jumping all over the world and rapidly introducing and killing off characters at a pace that is ill-suited for the current TV production model, with its season-long arcs and A-list actors.

For the TV version, showrunner Eliza Clark made three major changes: The tone has been changed from “aughts comic book” to “high-production-value cable series,” secondary characters have been added to help update the show’s politics for the 2020s, and some characters’ backstories have been fleshed out in ways that make them more realistic. Here’s a breakdown of what’s different. Spoilers for the first three episodes of the TV show (all of which became available to stream on FX on Hulu on Sept. 13) and the corresponding parts of the comic book follow.

[Read: Wait—Is the Monkey in Y: The Last Man Still Played by the Monkey From Friends?]

Both versions of Y: The Last Man share a common apocalypse—everything with a Y chromosome dies—but it shakes out a little differently in the TV version. The comic books never entirely explained what killed everything off, but they offered a number of theories, ranging from the prosaic (bioweapon mishap) to the supernatural (cursed amulet). So far, the TV show has been a little more grounded: It hasn’t offered any explanation for the plague yet, but there’s been no suggestion ancient curses were involved. In the comic books, every animal with a Y chromosome dies at the exact same time, which lends a little more credence to supernatural explanations. On the show, we see the plague work its way up the food chain over a matter of days, from rats to humans, another suggestion that whatever happened was more like a disease than a curse.

Yorick, the last surviving person with a Y chromosome, played on the show by Pride actor Ben Schnetzer, is broadly the same character on both page and screen: a semi-employed man-child whose dreams of being a professional escape artist are ruined by the apocalypse. He’s had a considerable glow-up on his way from 2002 to 2021, at least in terms of being less annoying. The comic book version of Yorick is very much a product of the aughts, and is continually astonished when he meets women who enjoy the same not-very-esoteric pop culture he does. Early on, he tells a woman who says she likes David Bowie, “I didn’t think pretty girls were into that stuff,” and later, he jokingly proposes marriage to another woman because she owns a DVD of The Last Detail and named her boat after a spaceship in Kurt Vonnegut’s The Sirens of Titan. The TV show’s Yorick is a man of the 2020s, and is a disaster in slightly different ways. In the show’s first episode, he falls behind on rent so badly that his mother gets involved, botches a marriage proposal so badly his girlfriend flees the apartment, and then falls asleep listening to 69 Love Songs. (Relatable!) The core idea behind the comic books—the last man on Earth turns out to be kind of a loser—is still there, but the original Yorick came across as a lot less pleasant. Because the TV show doesn’t cram quite as much plot into its episodes as the comic book, its Yorick has to spend less time doing inexplicable things to serve the plot, which means its Yorick feels more like a complete person.

The Y: The Last Man comic books stay pretty closely with Yorick, which means some of the other characters are pretty sketchily drawn. No character gets shorter shrift from this structural choice than Hero, Yorick’s sister. In the comic books, we meet her moments before the plague hits, hooking up with her boyfriend in the back of an ambulance. When she next appears, a few issues later and a few months into the pandemic, she’s given herself a mastectomy and joined an anti-male cult known as the Daughters of the Amazon. (There’s a myth that Amazons cut off one of their breasts to be able to better draw a bow; this gets mentioned in the show, but is very literal in the comics.) Hero’s change in character is pretty undermotivated, and although the comic book later tries to fill in some of the gaps with flashbacks, it’s not entirely convincing.

The TV version spends a lot more time with Hero, played by Olivia Thirlby, and is doing a lot more work to get her character from point A to point B. For starters, they’ve given her a healthy dose of guilt: On TV, her boyfriend is married, and Hero accidentally kills him during a quarrel over whether or not he’ll tell his wife about the affair. Since every other person with a Y chromosome dies in the next few hours, Hero never faces any consequences for the murder, which puts her in a more vulnerable position than the comic book character. The comic book only spends a few panels on Hero’s decision to join the Daughters of the Amazon, but it’s an entire plotline in the show. The Daughters of the Amazon are also pretty different: In the comics, their leader is a woman named Victoria, who is coded as a feminist intellectual. On the show, they’re led by Roxanne (Missi Pyle), a former police officer whose distrust of men comes from her professional experiences. It remains to be seen how successfully the TV show will be able to sell Hero’s heel turn, assuming it still happens, but it’s spending a lot more time and effort justifying it than the comic book did.

In comic and TV show alike, Yorick and Hero have a powerful mother: Jennifer Brown (Diane Lane), a politician who is promoted to the presidency when all the men ahead of her in the line of succession die in the plague. A quick way to measure the distance between 2002 and 2021 is to compare Brown’s place on the political spectrum in the two versions of Y: The Last Man. In the comic books, you can tell she’s an independent thinker because she’s an anti-abortion Democrat, which was still a thing then. In 2021, she’s still heterodox—it seems like she was considered for a position in a Republican administration—but her signature issue is online harassment and she demonstrates her political independence by calling out the president for having racist and misogynistic supporters.

Because the comic book stays with Yorick much more closely than the TV show does, most of the political drama in the show around President Brown and the women stuck in the Pentagon was invented for the series. Amber Tamblyn’s character, who as a daughter of the first lady combines elements of Ivanka Trump and Meghan McCain, is new, and so is President Brown’s aide Christine Flores (Jess Salgueiro) and White House political adviser Nora (Marin Ireland).

The TV show’s President Brown also inherits a slightly different political situation than she does in the comics. In the comic books, the first significant geopolitical event after the pandemic is an all-out massacre in the Middle East as Israel, with its much larger ranks of trained female soldiers, wipes out its neighbors, something the TV show has decided not to touch so far. (One of the comic book’s major villains, an Israeli special agent who attempts to secure Yorick for her homeland, hasn’t shown up yet either.)

Sam Jordan (Elliot Fletcher), a trans man who is a friend of Hero Brown’s, was added for the TV show. The original comic book occasionally featured trans characters—as in the TV show, only people with Y chromosomes died in the plague—and, in the comics, Yorick manages to stay hidden in plain sight by letting people assume he’s trans, but there aren’t any major trans characters. Adding Sam Jordan lets the TV show examine gender more fully than the comic book did.

Agent 355, a member of a secret spy organization known as the Culper Ring, shows up more or less unchanged in the TV show. As with the other characters, however, the TV version has been made a little more grounded. In the comics, we first meet Agent 355 on a mission to Al-Karak, Jordan, where she fights off a group of turbaned assassins while trying to recover an ancient artifact known as the Amulet of Helene. On TV, 355 (played by Ashley Romans) is a lot less like Indiana Jones: We meet her tricking white supremacists in Oklahoma into blowing themselves up. Structurally, however, her character works the same way: The president tasks her with protecting Yorick and traveling with him to find a geneticist who may be capable of researching the origins of the pandemic.

Yeah, they didn’t film that part.